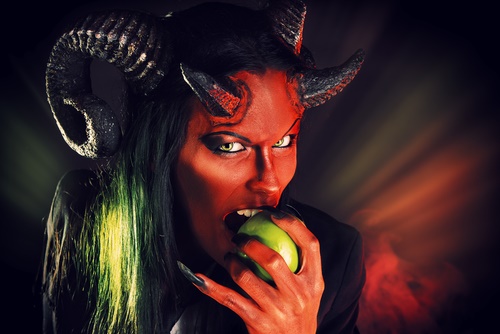 The slave went to his chambers and laid on his cot, still excited from the days events, and desperate to please his Goddess, and make it to his 30 day mark. He fell fast asleep, but slept fitfully, tossing and turning and having disturbing dreams. Twice that night he woke up with a start, swearing he heard a voice, felt a touch. But there was no one there. The sun rose and the slave stretched and opened his eyes. His body ached in a peculiar way he couldn’t place, and then he looked down. To his horror, there was seminal fluid spattered all over his belly. “What?!” gasping, “but I didn’t…” jumping up frantically rushing to clean the mess, but it was too late.  He heard her laughter behind him. “My goodness, you didn’t even last a whole 24 hours! Very well then, 60 days it is.”

Every night for the next 3 nights, the slave lived in fear of going to sleep. He started losing sleep, trying to stay up, paranoid that it would happen again. He begged his Goddess to lock his dick up. Begged and pleaded to be fitted for a cock cage so there was no way he could “accidentally” touch himself and cum, but she dismissed him, and told him that part of his training would be having to practice self control, and that this also included not having wet dreams. She could see his every move, there were cameras fitted all over the mansion, so if he tried to sneak a wank session, he would be caught and punished. Every night after finally succumbing to sleep, he would have the same fitfull dream: A beautiful dark haired seductress, slipping into his chambers, and stroking him, making him so hard and so aroused, that he couldn’t help but release. His punishment for cumming was the most humiliating, painful, and degrading tasks. And it was worse for him if he denied any wrong doing.  Sleep deprivation and grueling punishments began to chip away at his mind. He started to hear and see things during the day that made no sense. But the worst was yet to come.

Like the story? Call me and let’s get your succubus orgasm denial training started! Call 1-800-601-6975 and ask for Brighton.