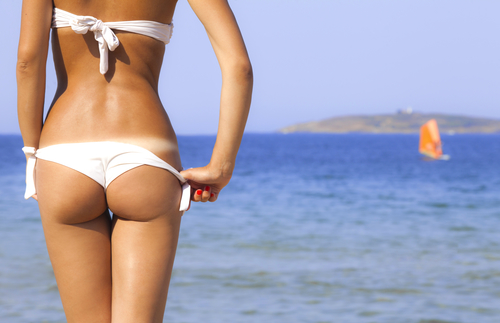 Not all those who wander are lost, and in the case of this particular fellow – we’ll call him Jason – his wandering led to a discovery of something inside him that he had yet to explore. You see, Jason was a sissy. All the signs were there, so all Jason needed was a life altering event to open his eyes. That event ended up being a visit to a sissy tanning salon that offered some very unique services.

As soon as Jason walked through the doors, he knew something was different about this tanning salon, but he forged ahead, determined to get a little R&R in after a stressful week of working overtime. The beautiful blonde at the reception desk smiled brightly at him, “Welcome to Sissies and Tan! Would you like to try our “FemTan” special?” Jason stared at the woman, perplexed. Partially because it had been a while since he’d been around such breathtaking beauty, and also because in his naivety, he had no clue what a fem tan was. The hostess explained that “If you purchase the FemTan package, it includes complimentary champagne, massage, a salon exclusive pampered silk sissy skin treatment, a guaranteed exotic sissy tan, and a free gift bag.”

A Tan That Will Leave You With A Special Glow

After agreeing to purchase the package – not realizing that he was about to become a coerced sissy – Jason followed the bubbly blonde hostess to the back, where she directed him to a private room. Inside the room there were scented candles lit, a tanning bed, and a massage table. Jason was ordered to remove all his clothing as the blonde woman handed him a hot pink satin robe to put on. “Put this robe on after undressing, and an esthetician will be with you shortly.” Crumpling his face and then shrugging, Jason had never worn pink before in his life, but work had been stressful and he decided that no matter what, he was going to enjoy himself. There was something about this place that was so soothing, and had a relaxing atmosphere and a pleasing floral scent that he couldn’t quite put his finger on.

A few minutes later, two women entered the private room, a brunette and a red head. One carrying a tray holding a flute of champagne with a strawberry garnish, the other carrying a basket that appeared to be filled with towels and toiletries that Jason assumed were tanning and massage supplies. Both women smiled at him as he sipped his champagne, the red head ushering him over to the massage table and ordering him to remove his satin robe. Jason felt strangely warm and giddy, completely relaxed as he dropped his robe in front of the woman. She immediately retrieved the robe and told him to lay on the table. Jason closed his eyes and felt the woman put a warm gel pack over his eyelids, just as he started drifting off to sleep. When he awoke, he noticed how smooth and silky his skin felt, and then he noticed that while he was napping, they had put what felt like a pair of thong bikini bottoms on him. The women helped him up, and explained that the “thong” was for protection and to ensure he got a quality all over tan. Jason was woozy and the room was spinning as they helped him into the tanning bed. Once inside, he dozed off again.

Jason awoke, what seemed like hours later, feeling refreshed and completely relaxed from head to toe. He stood up slowly, turning the knob on the wall to turn the lights on. Walking over to the full length mirror, Jason began pulling off the “protective thong” and noticed that it had several straps on it, criss crossing over his hips and back. Finally freeing himself of the contraption, he lifted his head, looked in the mirror and got the shock of his life. He was at least three to four shades darker, with thong bikini tan lines from where the straps covered his skin. The shape and design of the bikini lines was very visible under the bright light of the overhead lamp. He blushed profusely, but instead of being embarrassed, he felt himself getting aroused. Then he turned around to look at the back view. There, before his very eyes, was a large mark on his left ass cheek that resembled a playboy bunny. On the other cheek read the words “sissy girl” made prominent by his dark tan and the pale skin that had been covered by the stickers they placed on him after he fell asleep. “Thanks for tanning with us today, and enjoy your free gift!” the pretty blonde said as Jason made his way to the front door. Jason smiled, blushing and turning his head quickly. He opened the bag once he got home, and gasped at the contents inside. It was all clear to him now that he would be returning to the sissy tanning salon very soon.