Alex had always been a sci fi geek, and a comic book nerd, not to mention computer savvy. He also had a few fantasies that might seem strange to an outsider. His biggest fetish? A cyborg fantasy, remnant of the movie weird science. A mistress machine dream girl come to life who fulfills all his wildest desires, and is wholly devoted to him, and only him. So, of course, when he met Brighton, she was everything he’d ever imagined, and their relationship seemed too good to be true. And you know what they say: If it seems too good to be true, it probably is.

Tiptoeing lightly down the corridor, he could hear the clicking and whirring of gears, and see the flashing lights of the computer room. He had followed his new girlfriend to the lab that she said she worked at, after hearing all the rumors about companion robots, and matching them up with her suspicious behavior. What he found was more than he bargained for.  Pausing to compose himself, Alex could hear her moving around in the room, and then.. silence. He braced 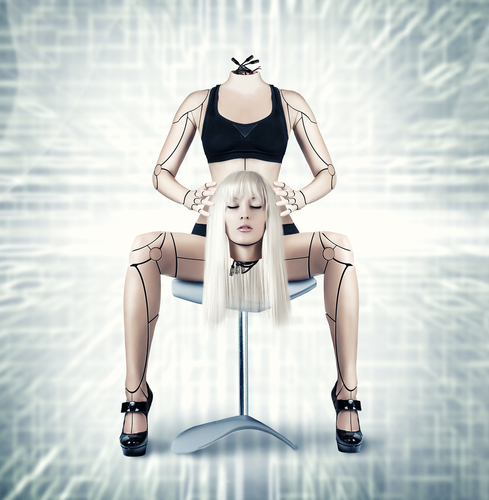 himself, swallowing hard, and willed his legs to move down the hall and to the open door he’d seen her go through. He had to know the truth, even if it meant that his picture perfect girlfriend wasn’t who she claimed to be.

Inching his way to the door, Alex stopped. He still heard nothing but beeps and clicks and the sound of his own heart hammering through his chest. Taking a deep breath, he peeked around the corner, and what he saw in that room was hardly what he expected. There was a woman – or a real woman robot – sitting in a chair in the center of the room, but she looked nothing like Brighton who was nowhere to be found. Had he made a mistake? No! She came in here! He was sure of it! But that wasn’t Brighton. The woman in the chair had a slightly fairer complexion, and platinum blonde hair, and looked like something from a cyborg fantasy. Her eyes were closed, hands resting on her lap, completely still.

My Girlfriend Is A Robot

Suddenly the hands twitched, and the mystery woman lifted them to either side of her head. Her middle fingers pressed down and Alex heard a click. A second later – to his horror – the woman lifted her head clean off her shoulders. Holding the head in front of her, and opening her eyes, she stared right at Alex. His heart stopped, as the machine’s mouth opened, and he heard his girlfriend’s voice. “Human intruder identified,” the voice said. Suddenly, panels opened all around the robots head, and it began changing its appearance. When all the interchangeable panels were settled in place once again, it had taken on his girlfriend’s likeness. The head smiled at him, “Hello Alex. I’ve been waiting for you.”

If you liked this story, and you would like to discuss your phone sex machine and cyborg fantasies with me, you can call me at 1-800-601-6975 and ask for Mistress Brighton. Until next time….